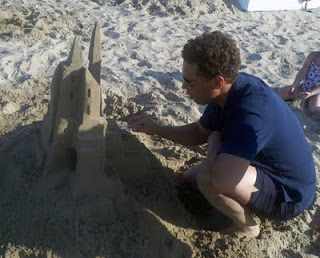 Yesterday I saw this guy again, building a big sandcastle on the Greenwood Beach (not Dempster as stated previously, more details on that later) and we actually spoke. Turns out Dave (we'll respect his privacy and use first names only) is for hire and teaches children and adults alike how to make sandcastles. Can you believe it?

Dave is an Evanston resident and can usually be found at Greenwood Beach, he says another guy named Omar works on sandcastles several beaches down. I'll keep you posted as to what I find.

This guy was a little too busy to chat, so I didn't get any intel out of him but if any of you know where to apply for this job or what city funding makes this happen please contact me directly at thelisadshow@gmail.com.
Posted by The Lisa D Show at 10:55 AM No comments:

On June 25, 2011, the Evanston Parks Coalition hosted the first Food Truck Festival in Grey Park. Exciting in its own right for foodies, the festival was a dress rehearsal for what the park can be, for me and my family it meant cupcakes for lunch!

I was thrilled see a city park packed with food trucks and hungry foodies in my new hometown and apparently so was everyone else - the event was packed. My family managed to eat from the Flirty Cupcakes truck but we didn’t last in the long lines for Hummingbird Kitchen and 5411 Empanada.

We ordered a sample 4-pack of cupcakes from Flirty for just over $5 which included Devil In Disguise (Red Velvet Cupcake With Cream Cheese Frosting), Curious George (Banana Chocolate Cupcake With A Light, Salted Caramel Italian Buttercream Frosting), No Plain Jane (Vanilla Cupcake With An Italian Vanilla Buttercream Frosting) and The McDreamy (Chocolate Cupcake With A Cream Cheese & Chocolate Filling). By far our favorite cupcake was the Devil in Disguise and four mini cupcakes hit the spot. You can find out where the Flirty Cupcake food truck will be next by following them on Twitter and Facebook or for private parties and events, just visit their website.

We didn't stay for free Zumba classes or the sing alongs as we came to eat! Congrats to everyone whoo helped put this on (full list below) and my only recommendation would be more food trucks next time, Evanston eaters will turn out.

For local residents this event was more than just a food truck festival. The Evanston Park Coalition has been hard at work trying to revitalize Grey Park, which is located adjacent to the Albany Care Home for the mentally ill.

As reported in the Chicago Tribune, “The park has sparked some controversy in recent years. While the city has placed the park on its 2012 capital improvement plan list, some residents have expressed concerns with the park’s proximity to Albany Care, a mental health center across the street whose residents often congregate in the park for a cigarette.” (Click here for full story.)

The EPC has a proposal from Project for Public Spaces (http://www.pps.org), a well known nonprofit that redid Bryant Park. PPS would bring their place-making process to Evanston if EPC raises the money.

According to Belén Ayestarán from the EPC, the people and organizations listed below made this event possible;

• Evanston’s Parks and Recreation Division
• Hummingbird Kitchen
• 5411 Empanada and Flirty Cupcakes (Flirty Cupcakes donated 2 trays of mini cupcakes to Albany Care residents)
• Albany Care for preparing the park during the clean-up and for making it possible for their residents to participate in the event through a creative point system
• Everybody Move
• Hip Circle Studio
• Reedy’s Smokin’ Cattails
• The Custer Street Fair
• The Main Street Merchants and the Grandmothers’ Park Initiative
• The Metropolitan Planning Council of Chicago
• Davon Woodward, Jeff Cory, and Eric Palmer from the City of Evanston
• The Center for Independent Futures

Thank you for reading my new blog "Evanston Newbie", a recent project that I am using to chronicle my new life in Evanston. Do you have favorite Evanston bakeries, bike shops, events that you can recommend? Send me an email at thelisadshow@gmail.com and I will post my review on this blog. -Lisa Degliantoni
Posted by The Lisa D Show at 9:05 PM No comments: 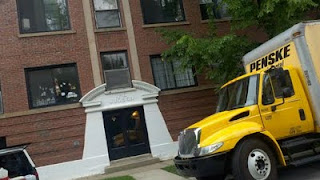 Our trusty Penske arrived safely on June 10, 2011, outside of our new home in Evanston, IL, from our old home in El Paso, TX. After 7 days on the road we are thrilled to start unpacking and meet our new city.

Thank you everyone who made the transition a good one, we will use this blog to keep you posted of our new life and all the fun discoveries we encounter.
Posted by The Lisa D Show at 8:17 AM 3 comments: