Evanston Named One of the Best Suburbs for Education in America!

From Patch
Evanston ranks among the country’s best suburbs for education, according to the real estate website Movoto.
The site put Evanston at No. 7 on its Top 10 list. It singles out city’s high test scores, high graduation rate and large spending per pupil.
Newton, MA tops the list, with Plymouth and Minnetonka, MN and Wauwatosa, WI representing the Midwest along with Evanston. Evanston is the only Illinois community to make the list.
The site compiled the list by assessing four criteria: student-teacher ration, money spent per year per student, high school graduation rate and GreatSchools.org rating, which is based on test scores.

The top-ranking suburb in the country was Newton, Massachusetts, followed by Plymouth, Minnesota; Ellicott City, Maryland; Minnetonka, Minnesota; and Dublin, Ohio.
The only other Chicago-area suburb to make the list was Skokie, which ranked at no. 12. 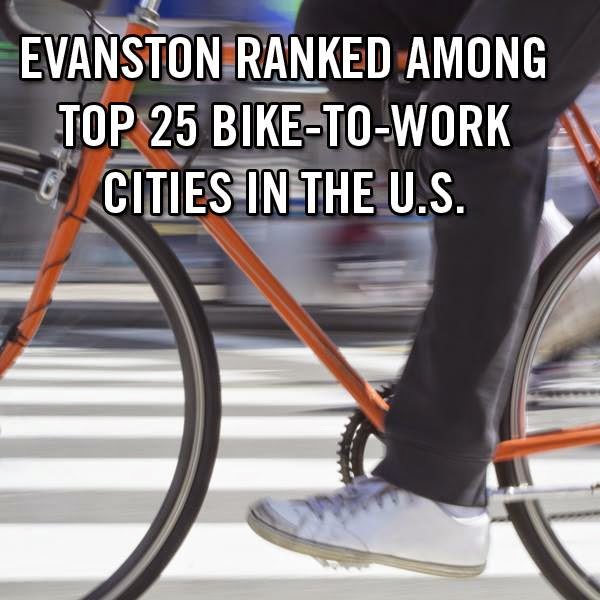 Evanston is one of the nation’s top 25 cities for biking to work, according to a recent Bloomberg News report utilizing U.S. Census data.
With 5.3 percent of commuters pedaling to their jobs, Evanston ranks as number 15 on Bloomberg’s list. It is the only city in Illinois to make the top 25.
Other top bike-to-work cities include first-ranked Davis, California; Boulder, Colorado (2); Madison, Wisconsin (9); Minneapolis, Minnesota (20); and Bloomington, Indiana (25).
Click here to read the full list.
Posted by The Lisa D Show at 6:29 AM No comments: 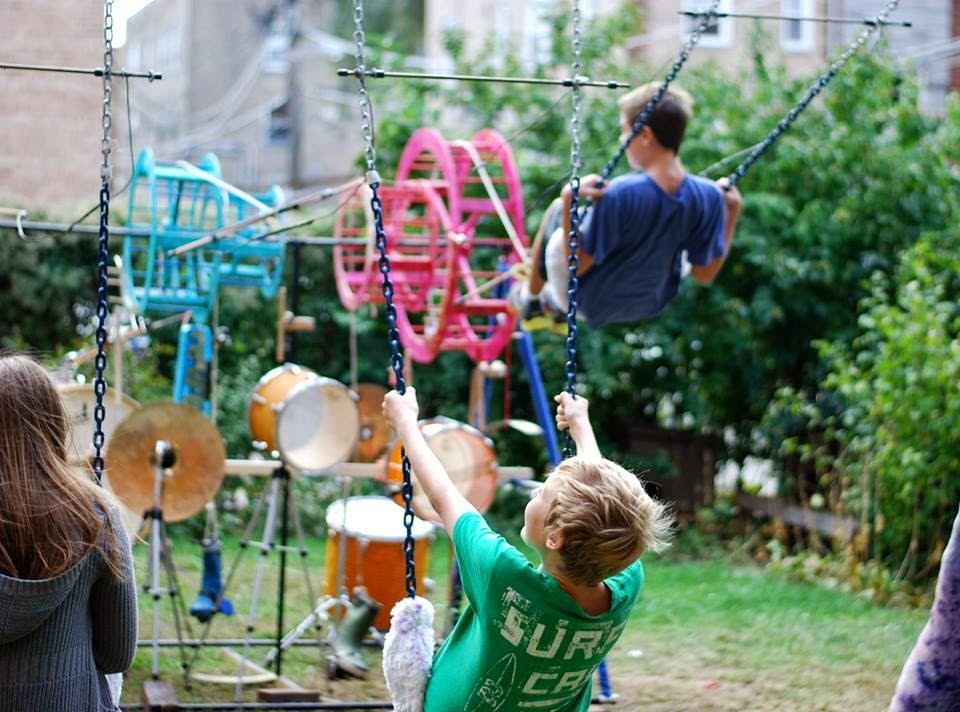 This Saturday, August 23, 10 a.m. – 5 p.m., Swing Set Drum Kit will be at the Bucktown Arts Festival for everyone to enjoy!
Senior Citizens Memorial Park
2300 N. Oakley/2300 W. Lyndale
Visit bucktownartsfest.com for more info and be sure to stop by this fun, interactive swing set and play the drums while swinging.
Posted by The Lisa D Show at 11:36 AM No comments:

Who pours homemade blue cheese dressing on a roast beef sandwich? Al and his brother. Go there now  and order it, it's the best deli sandwich you'll have in years. Served on a fresh baguette it's definitely huge enough to share. 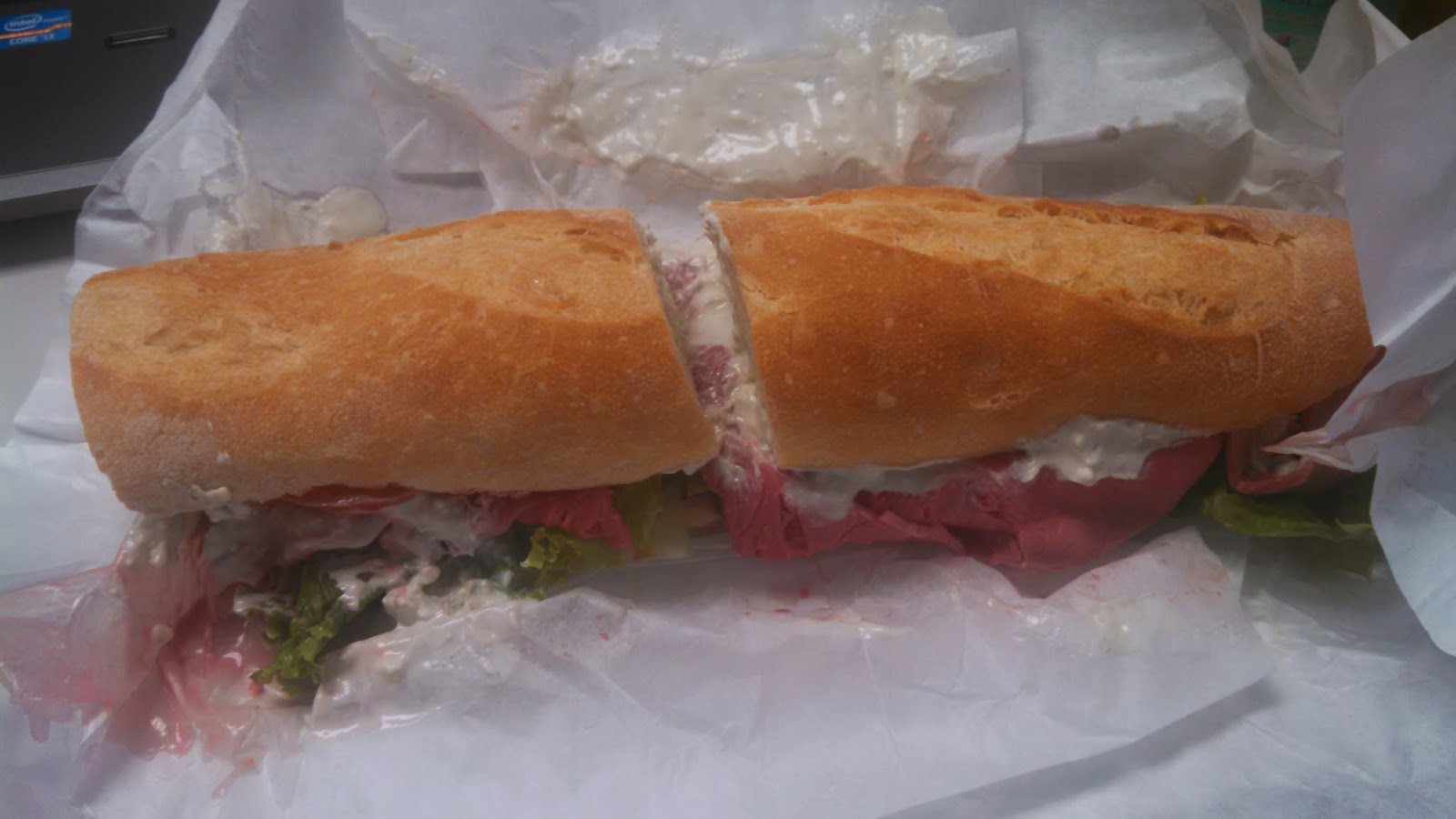 If you don't like roast beef try the turkey with gruyere on a baguette, you'll be so happy with your purchase. Pictured right is the turkey, above is the roast beef with the blue cheese dressing pouring out all over the place. Amazingly delicious. 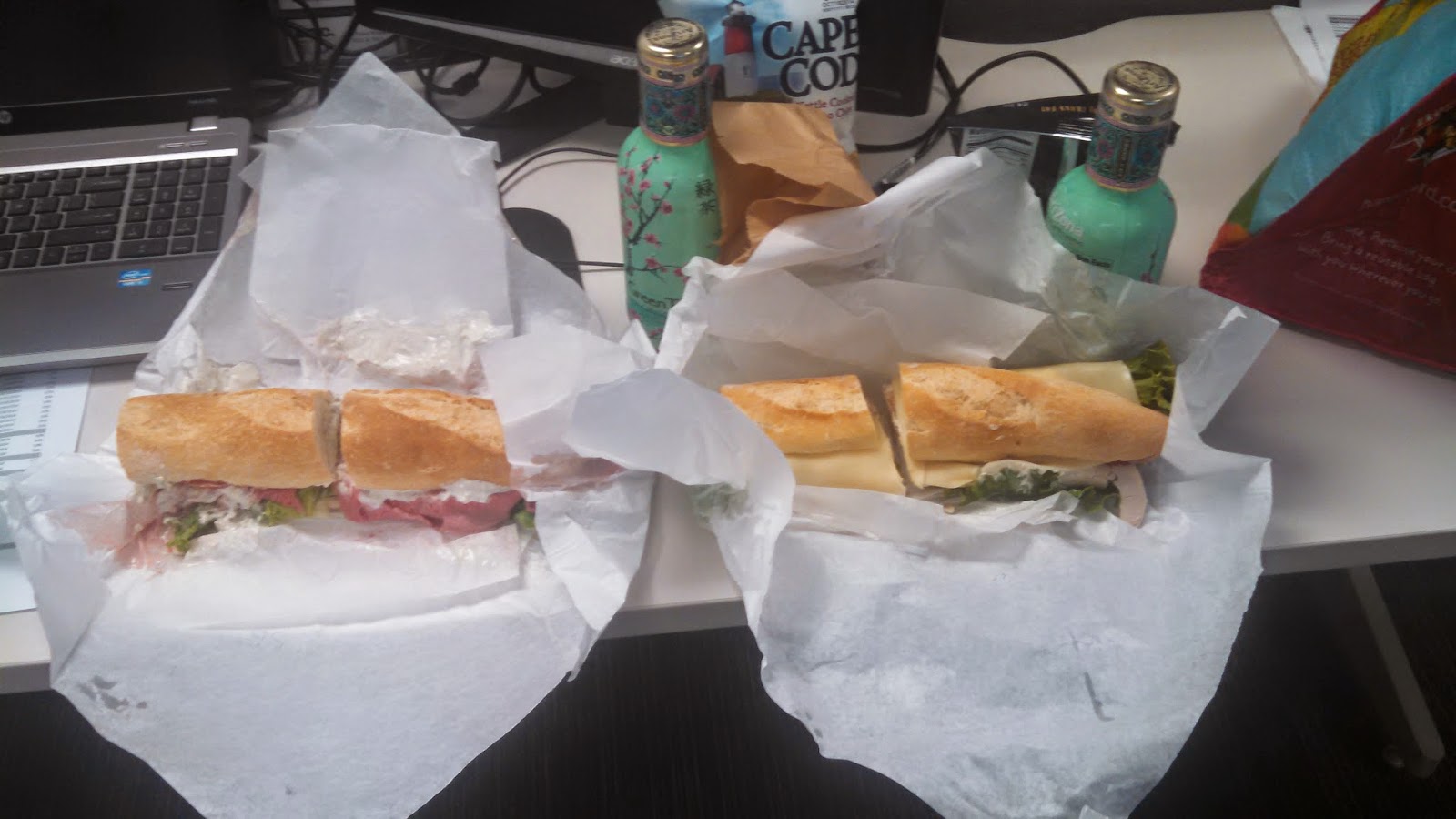 Finish the meal with a larger than normal salted caramel macaroon. Then plan your sandwiches for the rest of the month accordingly as the variety is impressive - pate, smoked salmon, veggie, etc.

Lastly, make the time to wait in line and have your sandwich made with care by a guy who's been doing this for a long time.

When did Evanston get Hip? When Lisa D. moved here, of course!

1,900 people sent me this article when it posted on the Chicago Crain's blog and granted they missed a few gems (Temperance), they got it right. Evanston is getting hipper by the minute and it's got everything to do with food! Thank you to all the chefs and entrepreneurs who have taken the risk and gambled on Evanston, it's working! I also think we're uber hip because we finally have a parklet, thanks Hewn! 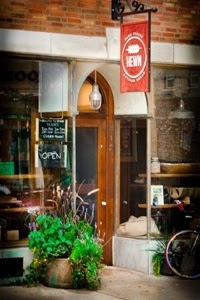 When Amy Morton opened Found Kitchen and Social House in Evanston in 2012, weekend wait times for a table averaged two and a half hours. The farm-to-table concept was soaring in Chicago, but it was still new in the North Shore suburb.

“It was an empty canvas,” Ms. Morton says. “There was a huge void.” While a few restaurants, including Quince at the Homesteadand Union Pizzeria, were offering more contemporary dining, Evanston locals often went to Chicago for a night out. Now, Ms. Morton says, Evanston has become a dining destination for Chicagoans.
“People from the city are just coming here on their own, it's really something,” she says. “We've been open a year and a half, and in the last year we've seen so many things open.” She deadpans: “It is the next little Brooklyn.”
Brooklyn may be a stretch, looking at the gleamingly clean streets of a town where spitting on public property is illegal. But it's hard to ignore the precious tinge that the artisanal movement is batting around the city: whole-hog meat shops where the owner can name the farmer who raised each cut (Homestead Meats); loaves of bread made by hand from local grains and sold in compostable packaging (Hewn); restaurant bars that serve liquor from distilleries within biking distance over old Johnny or Jim (Found).
Since the start of 2013, nearly two dozen new restaurants and breweries have opened in Evanston, and the artisanal, local-food movement influences many of them. There are two new restaurant/breweries (Peckish Pig, Smylie Bros. Brewing Co. ), a brewery with a tasting room (Temperance Beer Co.) and a home brew shop, Brew Camp. A nanobrewery,Sketchbook Brewing Co., is slated to open this month.
A sampling of the restaurant openings includes David Morton and Michael Kornick's DMK Burger and Fish; Dollop Coffee Co. and Hoosier Mama Pie Co.; the fast-casual Lyfe Kitchen; seasonally focused restaurant Farmhouse; and, most recently, Boltwood, co-owned by former Publican chef de cuisine Brian Huston, which joined the farm-to-table clan in July.
And more is in the works: the Wood Shed, a restaurant serving wood-fired pizzas and smoked meats, is scheduled to open this fall on Central Street.
Debbie Evans, who, along with her husband, Jamie, owns the Peckish Pig, sees the Evanston renaissance as an outgrowth of the artisanal movement in Chicago and throughout the Midwest. “People are realizing how important it is to have great food and how accessible it really is, without breaking the bank. Evanston has caught on, and it's spreading like wildfire,” Ms. Evans says.
The brewery collaborates with other new, locally minded businesses. One is Hewn, which makes a “spent grain” bread incorporating grains used by Peckish Pig and Temperance in the brewing process.
Hewn co-owner Ellen King says working together is part of the fun. “We're all local in the community and our kids all go to school here and we're all having fun with our businesses,” she says. “It's honestly like a perfect storm of everybody following their passion and keeping it in their community.”
Johanna Nyden, Evanston's economic development division manager, says the food and drink renaissance there is simple to explain: In Evanston, as elsewhere, diners are demanding more. “I think 20 years ago when I was here the coolest thing that came was like a Bar Louie. But now, that doesn't cut it,” she says.
—Kate Silver, Follow On Dining on Twitter at @CrainsLife. 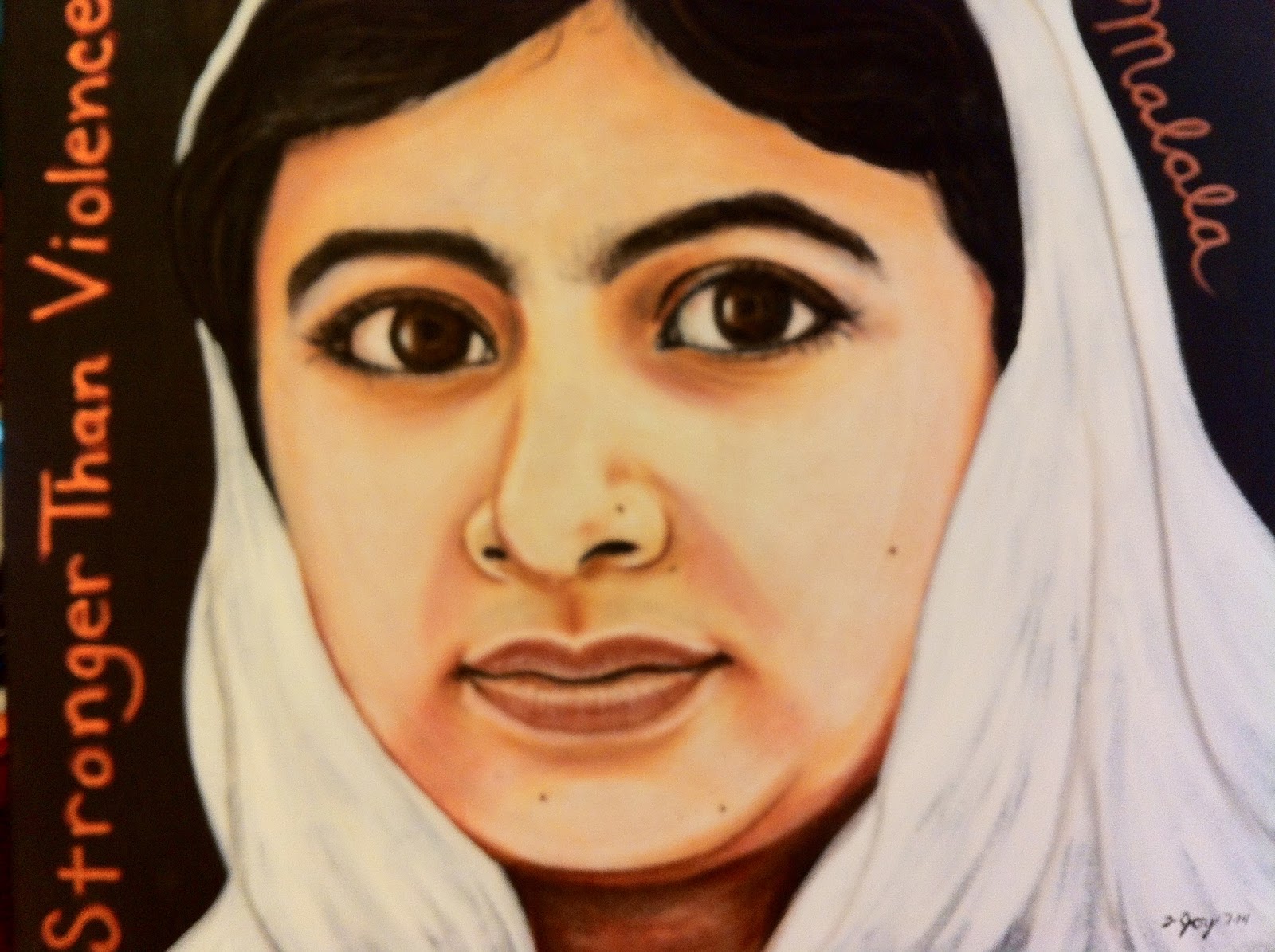 Please RSVP to fwjoy@icloud.com
Posted by The Lisa D Show at 3:58 PM No comments: 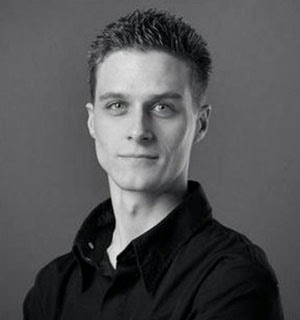 From Chicago Magazine: Patisserie Coralie Will Bring a Taste of Paris to Evanston
The owner of Bistro Bordeaux is bringing a French pastry whiz to his forthcoming cafe and boutique.

BY PENNY POLLACK AND GRAHAM MEYER

With Bistro Bordeaux and Crêperie Saint Germain both rolling along like a downhill stage of the Tour de France, Pascal Berthoumieux announced he’s bringing a third bar to his tricolor in downtown Evanston. Patisserie Coralie (600 Davis St., Evanston, 847-905-0491), a traditional boutique pastry shop, will move into the former Cafe Mozart space after renovations.

Serving pâtisserie classics such as macarons, éclairs, tarts, Napoleons, and madeleines to remind you of a Parisian pastry shop, Patisserie Coralie will showcase the work of the pastry chef Manuel Bouillet, a veteran of the well-regarded Parisian pastry shops Fauchon and Un Dimanche à Paris. Coffee will come from Julius Meinl.

Sofas and settees will sit next to coffee tables made of rolling pins in what Berthoumieux calls a “sexy and comfortable” atmosphere. He will also display his collection of antique pastry objects.

The pâtisserie is named for Berthoumieux’s almost-two-year-old daughter. That sounds like a children’s book waiting to happen.
Posted by The Lisa D Show at 10:10 AM No comments: 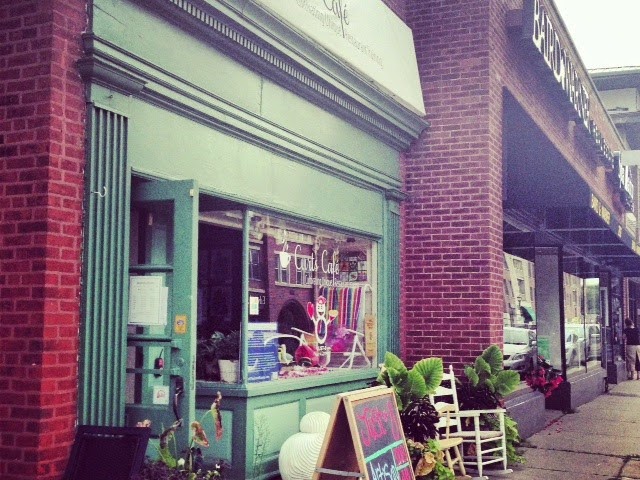 Goal: Launch a vibrant café on Dempster Street that provides training for at-risk teen mothers in life skills and food service
Heartwood Center is collaborating with Curt’s Café to bring their warm and comfortable café and inspirational concept into the former Perla Café space across the street from Heartwood Center (located at 1818 Dempster). Many of you are familiar with the work the original Curt's Cafe does on North Central Street with at-risk teens and young men. We would like to replicate this training program to provide life skills and jobs skills to at-risk teen mothers. This new Café will feature nourishing food, coffee and smoothies in a part of town that does not have many healthy food options. The mission is to provide training and job placement assistance to young mothers to enable them to successfully contribute to their family and our community by joining the work force.
We are currently working to raise $150,000 in order to open Curt's Café South in September 2014 and need an immediate $50,000 to purchase the Perla Café space.
If the present and very profound issue of teen mothers touches your heart, we would be so grateful for your consideration. Time is of the essence. Be part of launching a much-needed workforce development program for Evanston's teen mothers and a neighborhood destination that nourishes our community.
PLEASE VISIT: http://curtscafe.org/ for the concept.
To discuss this project, please contact Kristen Hemingway @ 773.294.0636
Posted by The Lisa D Show at 5:41 AM No comments: